When the coral reef science community talks about the value of marine ecosystems to society, we often think and speak in terms of quantifiable resources, fisheries output, tourism income, and how reefs are physically utilized by people. However, coral reefs mean so much more, especially to island nations that are significantly connected to marine resources that define their surroundings, culture, and experience. It may be hard for more land-locked parts of the world to understand just what coral reefs mean to the countries and human populations that are geographically and culturally most connected to them.

Léo Barret  is a project leader with Marine Conservation Society Seychelles (MCSS) and co-founder and volunteer at Sustainable Oceans Seychelles (SOS), a local non-governmental organization that promotes sustainable use of natural marine resources. He is an accomplished marine scientist and conservationist, working with MCSS on the Cerf Island Conservation Program and spiny lobster habitat restoration efforts in Seychelles. Born and raised surrounded by these diverse ocean habitats, Léo has life-long knowledge and connection to coral reefs.

“They are part of my cultural heritage such as the Eiffel Tower is for Parisiens,” Léo explains. “They are the symbol of a lifestyle interconnected with the ocean and the muse of the almost lost art of contemplation.”

Along with SOS co-founders Nathalie Bodin and Gilberte Gendron, Léo participated in the data collection that helped create the Allen Coral Atlas’ Western Indian Ocean region. Conservation scientists like Léo, Nathalie, and Gilberte are extremely important to the Allen Coral Atlas team; not only do we rely on regional and local experts to collect and contribute data for the mapping process, we also seek those most knowledgeable to provide feedback before maps are ready for a public release. Involving regional, national, and local experts helps validate the accuracy of the maps while also generating mutual understanding and engagement with the organizations, agencies, and individuals that will ultimately be using the Atlas tools. It is such experts that help the Allen Coral Atlas balance the push and pull between large scale rapid mapping with user needs and classification accuracy. So Léo, Gilbert, and Nathalie have really been involved in the creation of the Seychelles maps on the Atlas from all angles - as data collectors, experts consulted for feedback, and in the future, among those who will use the Atlas in their conservation work.

We have already produced other regional maps with this expert feedback process including Eastern Africa & Madagascar, and Northern Caribbean & Bahamas. With each new region the Field Engagement team has improved this process and continued to add ways to foster increased collaboration with regional stakeholders. For expert feedback in the Western Indian Ocean, we received valuable insight from not only Léo and his team at Sustainable Oceans Seychelles, but also from David Obura and team at CORDIO, Dr. Holger Anlauf at University of Seychelles, and Dr. Sushma Mattan-Moorgawa at University of Mauritius.

While remote sensing allows the Allen Coral Atlas team to make global habitat maps rapidly and uniformly, there are still things you need a real human to see and interpret. The Field Engagement team caught up with Léo and Gilberte from Sustainable Oceans Seychelles earlier this month to give them a ‘sneak peek’ at the West Indian Ocean maps to identify any major inconsistencies as a result of the semi-automated process used to generate data layers.

A common problem with the semi-automated mapping process is misclassification, for instance, with highly turbid areas (water that is too murky to discriminate bottom types.). Léo found this problem in the Port of Victoria where water that is currently too murky for the Atlas to map was instead classified as Coral/Algae. These areas of high turbidity can be avoided in some cases; the University of Queensland mapping team can manually cut out distinct areas from the mapping process entirely if they are especially turbid to avoid this misclassification so that we don’t display erroneously categorized data. 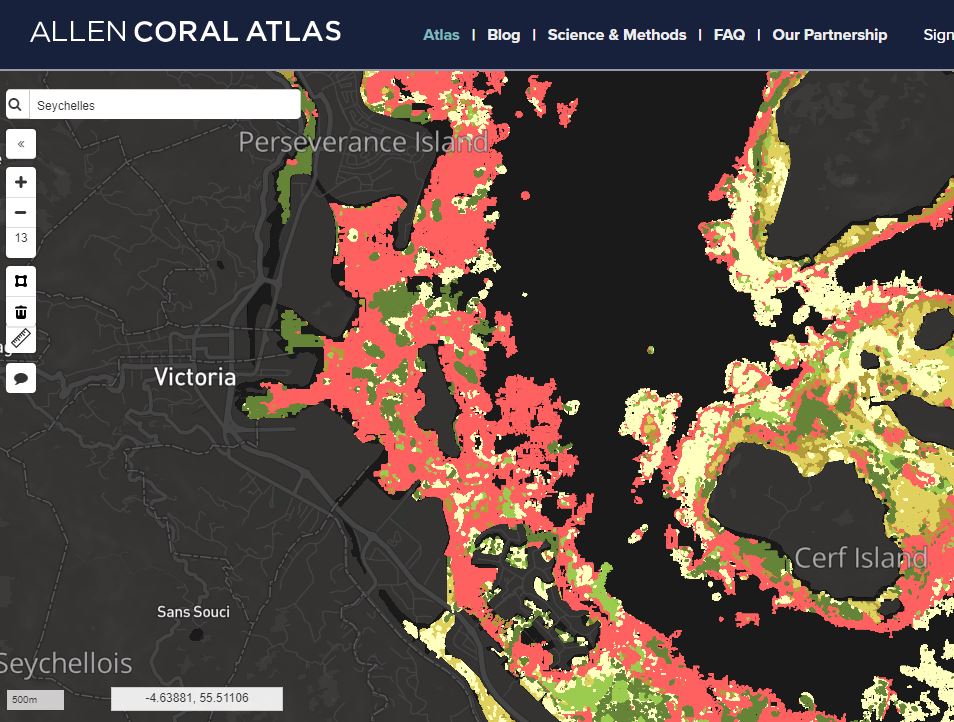 The process to remove these troublesome areas through masking is a largely manual process, so it is not possible to do this in every location where turbidity poses a classification problem. Luckily, when this problem was discovered along the coast of Mozambique and Tanzania, the mapping team were able to mask out turbid river mouths, such as in the case of the Ruvuma River. 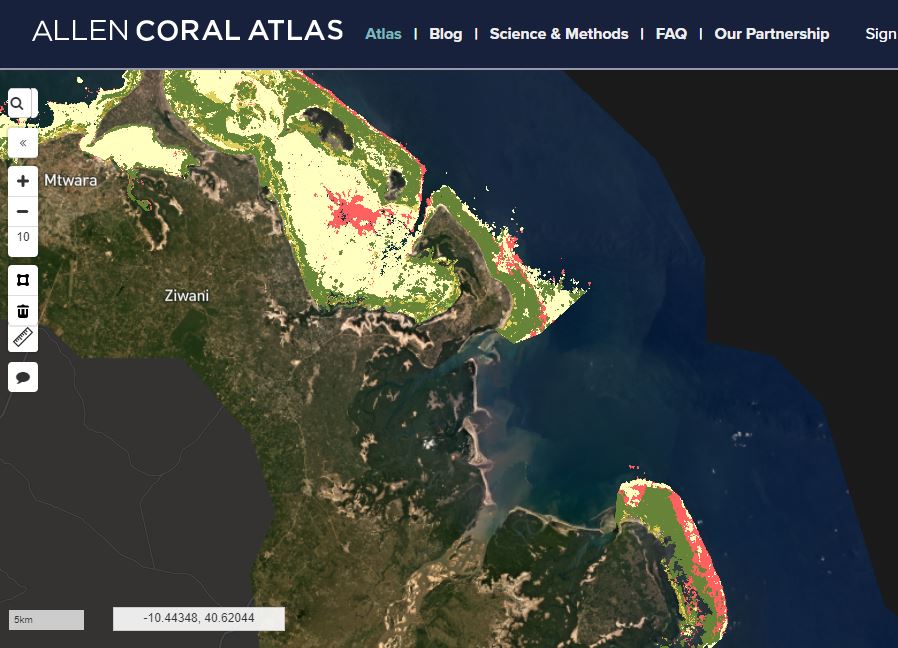 Ruvuma River that divides Tanzania and Mozambique - the turbid river mouth is masked out of the benthic data layer. On AllenCoralAtlas.org.

In areas where the mapping team at the Allen Coral Atlas are not able to mask out every instance of turbidity interference, users can now take advantage of the new download feature and process the data themselves to change portions of the map with known inconsistencies.

In some other instances, we are able to update the map based on an expert’s feedback. When we originally mapped the South-West Pacific region, for example, we heard from some local scientists that several large coral reef areas were missing. As we investigated, we discovered there were some inconsistencies with our depth data that led to misclassifications. Given the extent of errors from incorrect depth inputs throughout the region, we knew it was important to correct. Thanks to the support of experts and their field data, we were able to correct our depth algorithm, resulting in a second version of the South-West Pacific maps. What you see now on the Atlas is our updated habitat map of the South-West Pacific.

The Allen Coral Atlas benthic habitat layer is unlike any mapping effort before because of its level of detail and global coverage. Remote sensing and machine learning allow for rapid and relatively low-cost mapping approaches, but despite incredible improvements in remote sensing technology and techniques, these approaches are not as accurate as a person with close knowledge of a specific reef area or who has conducted direct observation. Any machine learning method is going to include some level of inaccuracy compared to purely manual approaches. Consider this: machine learning is a process by which a computer algorithm collects pieces of information about the characteristics of certain features. It builds an association with certain features to sort objects into classes. Data is used to create these associations with certain characteristics, or rather, the algorithm gets a taste of what things look like ‘on the ground’ so that it can extrapolate these characteristics and therefore classify much larger areas.

With the help of experts like Léo, Nathalie, and Gilberte at SOS, the mapping team at Allen Coral Atlas can circle back once a map is created to see how well the algorithm categorized underwater features. This step in the process is extremely important to the overall creation of the maps; having eyes in the water, and coral reef professionals who have intimate knowledge of their areas of interest provides insights to the mappers about why certain features get mapped incorrectly, and how to prioritize improvements to the process.

There will always be a push and pull between direct observation and applying technology to conservation; to meet the parameters of time- and cost-efficiency, Léo and many other conservationists see the benefit of effectively applying tech in coral reef research based on the urgent need for mapped data to make critical conservation decisions..

“We are at a tipping point for marine conservation. Tech permits us to analyze faster and gather data at large scale,” says Léo. “Such data are essential to create evidence and take action or management measures to protect and restore the function & services of the marine ecosystem.”

Scientists such as Léo have the incredible advantage of seeing these aspects of conservation from several angles. Not only is he a user of the Atlas and has given expert feedback on the completed maps of Seychelles, but he was also part of the team that collected the vital calibration transect data that informed the machine learning algorithm. And perhaps most importantly, he has the experience of living closely with coral reefs, among a society that values them personally and culturally, and brings the mindset of cherishing these habitats beyond their quantifiable or most apparent outputs.