We’re back with more maps!

You may have noticed that we’ve gone quiet for a while. That is because we have been hard at work producing habitat maps and developing other exciting features! Since our last blog update, we’ve released three new maps of different types, all in the Pacific Ocean. Here’s a little preview of each, but make sure to check them out for yourself on the Atlas!

To start scaling up from mapping small and well-known reefs, we first mapped a large area where we had ample field data to calibrate our rulesets. With considerable field data in Fiji, we determined this was a good location to test the limits of our methods in a larger spot, and then assess accuracy of the output. So, back in September, we released habitat maps of Fiji.

Off the coast of Labasa, Fiji

Having been successful in using our methods to create maps of Fijian reefs, we took it one step further: we outlined a region, including Fiji, of ecologically similar reefs, calling it the Southwest Pacific region. Again, we pushed the limits of our methods to create benthic and geomorphic habitat maps of this entire geographic region, and displayed it on the Atlas website earlier this year. The area includes geographies such as Fiji, Tonga, Vanuatu, Niue, Tuvalu, the Samoas, Wallis and Futuna, and New Caledonia. In total, the entire area is 4,428,140 km2, including 16,520km2 of geomorphic and benthic habitat maps.

With maps of the Southwest Pacific region published, we received a multitude of helpful feedback from local people in the region. With their help, we diagnosed some issues in our mapping methodology, much of which related back to how we were calculating depth values, which was then affecting our mapping classifications. Our team was able to create a new method for depth calculation based on a combination of satellite data sources, test it against field data for various sites around the globe, and conclude that the new method was more accurate than the previous method.

From our very own Mitch Lyons, Data Scientist at University of Queensland:

“Estimating water depth in the ocean from space is a seriously hard business. In this latest round of mapping on the Atlas, we’ve moved to a new method for estimating depth. Now it is much easier to differentiate the different reef classes along the continuum from deep water, reef slope and up over the reef crest onto the reef flat. Practically, this means we’re seeing a lot less noise in deep water, better mapping of the reef crest and more crisp boundaries between classes in general.”

With our mapping methods in hand and new depth calculation method, we generated benthic and geomorphic maps for Western Micronesia, which are now available to use!

Below: 4 views of Koror, Palau: 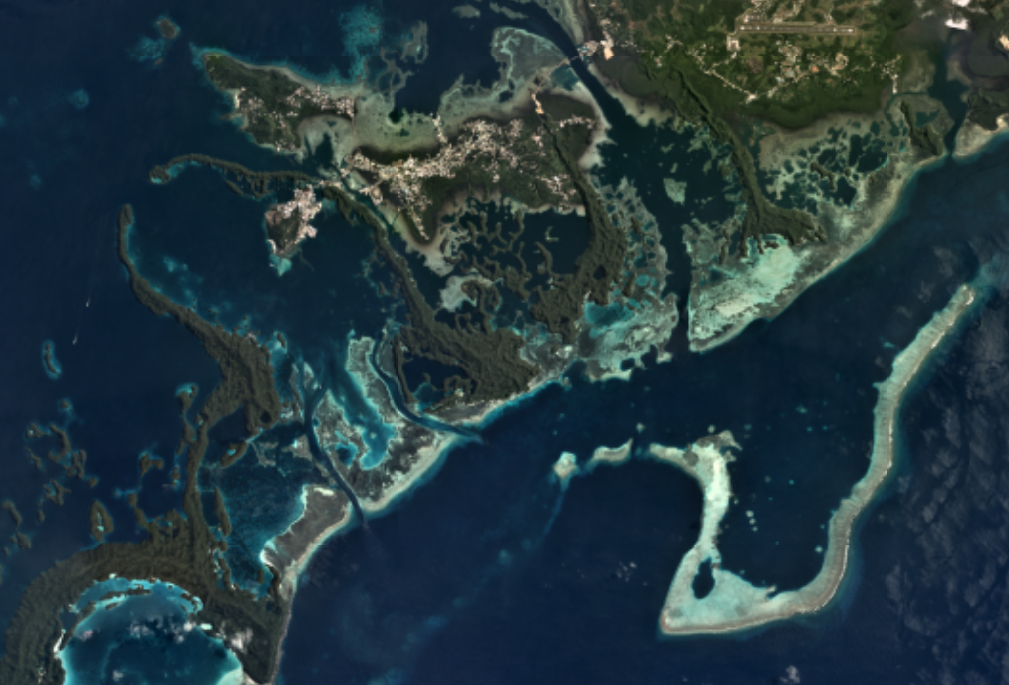 Stay tuned for our next mapping regions - the Northern Caribbean and Eastern coast of Africa - and for other blog updates. And as always, if these maps are useful to you, please let us know how you are using them!